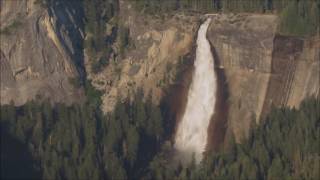 “Yosemite Valley, to me, is always a sunrise, a glitter of green and golden wonder in a vast edifice of stone and space.”  The great photographer and environmentalist Ansel Adams once said this in the early 1900s, and it still rings true.  Another famous lover of Yosemite, John Muir, was a strong advocate for protecting and preserving this area among others.  The push by John Muir and others in the mid-to-late 1800s to take preservation actions eventually led to President Lincoln designating it as our first National Park in 1864.  This was the first time in history that a federal government had set aside scenic lands simply to protect them and to allow for their enjoyment by all people.

The first time I visited Yosemite was in the fall of 2006, and I didn’t know what to expect.  I took a road trip with my friends Billy and Theresa from San Diego shortly after we had moved to SD from Ohio.  We arrived late on a Friday night after 11:00 p.m. with the plan being that we woudl sleep in the car before finding our campsite the next morning.  I had always felt a fondness and appreciation for nature, but when I first stepped out of the car in the middle of the night upon our arrival into the park, I was hit with the fresh, crisp mountain air with a strong overtone of pine, and I then looked up in amazement at trees hundreds of feet tall and saw the brightest stars I had ever seen up to that point….I knew then that I truly loved nature.  I’ve been back to Yosemite several times since this first trip, and I know I will make several more.

I once read an article about a group of environmentalists from the SF Bay area advocating for releasing the Merced River dam (Merced is the river that runs directly through the center of Yosemite Valley and it ultimately serves as a water source for many communities in the area) because the new water flow would reveal what is now a flooded second Yosemite Valley….I know there are very good, practical reasons for maintaining the dam, but I also feel it would be truly spectacular to have two Yosemite Valleys to visit, especially to reduce some of the tourist congestion at the current Valley.  Only time will tell…..

Yosemite has an abundance of hikes, back country backpacking, car camping, lodges, waterfalls, and an endless array of breathtaking views.

During my first trip to Yosemite in 2006, we saw a golden brown bear cub!  Unfortunately this was at a time before I made it a habit to glue a camera to my hand during my travels, so I never got a picture….  It was sauntering along the Vernal Falls Trail just about 10-15 feet off the trail, and a ranger was standing there urging everyone to be quiet and move by tenderly and quickly to avoid scaring it and bringing in an overly-protective momma bear.  Thankfully the cub eventually moved further away from the crowd without calling for its mother and everyone lived to tell the tale.

However, during a trip in November 2013, I was lucky enough to have a nice encounter with several mule deer.  The park was low on visitors due to the cold and quickly approaching winter season, but that meant more activity by wildlife!  While hiking to Mirror Lake (all dried up that time of year though), on three different occasions mule deer just moseyed onto the trail within feet of us.  I was able to gingerly approach one male mule deer who let me quietly approach and pet him.

One of my favorite hikes in the Valley is taking the mist trail next to Vernal Falls (317’ tall, and is fed by the even mightier 594’ tall Nevada Falls directly above it), but then break off to the right up the John Muir Trail (only a small section of the entire John Muir Trail) which then puts you at the top of Nevada Falls .  I had quite the adventure during a trip there with Billy and Theresa where Billy and I swam in the pool created by the mighty 317’ tall Vernal Falls.  The power from the water smashing into the pool below made for a very choppy and rough swim, but Theresa got a pretty cool picture of me and Billy hanging out on a large rock outcropping with the mist creating a rainbow in the picture.

Another must-do hike in Yosemite is the Lower and Upper Falls Trail, which is roughly 7.5 miles round trip and the climb up is a very steep hike with a total elevation gain 2,700’ in just under 4 miles.  But the views looking up at the falls as you hike, being sprayed with mist, and the view of the Valley from the top make the hike well worth the effort.

Another great hike is The Four Mile Trial to the top of Glacier Point.  This one provides similar views as those from the Yosemite Falls Trail, but from the south side of the Valley as opposed to the north side of the Valley.  The hike starts a little past the bottom of Bridalveil Falls, is roughly 5 miles one way, and has about 3,200′ of elevation gain in those 5 miles one way.  This is not a hike for the feint of heart….be ready for some real physical exertion and plan for it being an all-day hike.

I also always make a point to visit Mariposa Grove, which is where some of the largest trees in history grow.  Some of the Giant Sequoias here reach heights over 200’ tall.  The Giant Sequoia here named Grizzly Giant is dated somewhere between 1900–2400 years old, is the oldest tree in the grove, 30 feet in diameter, and is over 210’ tall.  Some of the trees that have fallen show how impressively big the trees are because you then get to see the massive root structure extending for several feet away from the tree.

I strongly urge everyone to visit Yosemite to understand and appreciate its natural beauty, but to also understand why it is so important for us all to do our own part to preserve nature.  Had early advocates such as John Muir not fought for this preservation, then it is quite likely that Yosemite, Sequioa, Zion, Yellowstone, and other parks would be full of strip malls, parking lots, and track housing.