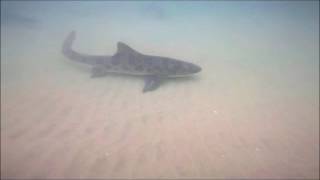 For the past couple of years I have heard of the phenomenon of leopard sharks appearing in large masses just in front of the Marine Room at La Jolla Shores, but never got lucky enough to see them.  Maybe I was going at the wrong time of year, wrong time of day, or entered the water at the wrong area, but I struck out time and time again.   Even scuba diving there several times resulted in no leopard sharks, and it appears that is because they are scared off by the noise of the bubbles and regulators.

However, September 18, 2016 was different–I saw an aerial drone footage of massive hordes of the sharks just a couple of days prior, so I jumped on the opportunity to make it a point of finding them.  I was rewarded with an incredible experience that I was not anticipating.  I must have seen a couple dozen different sharks and got within arm’s reach of a few.

These sharks are 100% harmless and pose absolutely no threat to humans.  In fact, even while wading in the water up to chest deep, they swim around our ankles but clearly don’t care that we are in their space (or they in our’s?).  I noticed that they quickly dart away in response to any sudden movement, so I chose to just bob along the choppy surface and not kick my fins too much in order to not scare them away.

While being as silent and still as I could, I was able to swim right along side and just above several of them and captured some excellent video footage with my GoPro extender stick.   The best method is to just relax while floating and let them come to you as opposed to kicking around in search of them.

From what I know, it is still rather unexplanatory as to why they have suddenly started appearing these last few years.  Researches have posited the theory that they are speeding up the incubation of their babies that hatch inside and feed of the yolk, because their habit is to always appear when the water is at its warmest (late May to October, in the afternoon) and the vast majority of them appear to be pregnant females.  These warmer waters allow them to increase their body temps and they can give birth to upwards of 37 young.  After having their babies, the mothers return north to colder waters in search of food and another mate.

It’s very possible to also see in this area stingrays, guitar fish, c-o soles, some crabs that come up from the deeper cove area, and maybe even the local resident Green Sea Turtle (who I have also yet to come across).   Just make sure that while walking in the shallow waters you shuffle your feet in order to not get stung after accidentally stepping on a stingray, or else your day of adventure will instantly turn into a very regrettable experience.