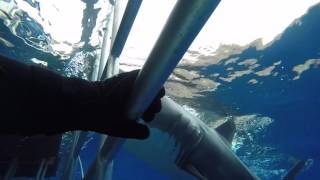 Scarboard giving us some close ups 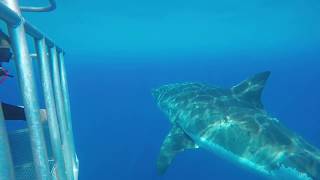 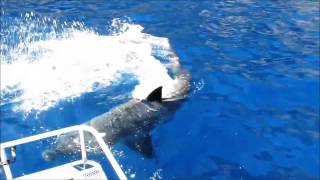 Looking into the cage from a shark's point of view 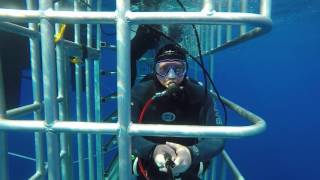 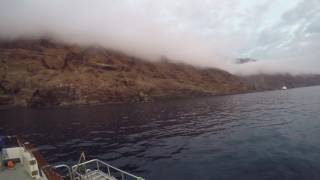 October 2016 I joined Horizon Dive Charters (http://horizoncharters.com/) to motor down to Guadalupe Island off the coast of Ensanada, Mexico to meet some of the world’s most feared creatures–Great White Sharks!!!  Along with Cape Town, South Africa, Guadalupe Island is one of the best places in the world for this experience.  Guadalupe is a small volcanic island located in the Pacific roughly 150 miles west off the coast of Ensanda, and approximately 180 miles southwest of San Diego.  The water was outstanding!!!!  The area consistently has clear blue water with 125 – 150 foot visibility that stays at roughly 70 degrees year-round.

Approximately 170 unique, individual great white sharks have been identified here, with one of the largest being Lucy, a star of shark week that reaches up to 20 feet in length.  Although I was not lucky enough to see Lucy, we did get to see Scarboard a couple of times and she is a MONSTER at about 17 feet in length with massive girth!!!  She looks quite fearsome with all of her scars.

The majority of the sharks we saw were roughly 10-12 feet in length, and were mostly juveniles.  It has been reported by scientists who regularly study white sharks that the older ones tend to leave the cages alone because they do not identify us as a food source.  So the juveniles are the ones who mostly came up to investigate and figure us out.  The boat crew would toss in a frozen tuna head the size of a bowling ball and then draw the sharks around the cages.  It became clear that the juveniles were using the tuna heads as an opportunity to hone their predatory skills of stalking and darting.  Their behaviors were very similar to a cat playing with a ball of yarn batting it around.  Sometimes the sharks would completely bite the head off the rope, but usually they would just bite and release or turn away at the last second.  It was fascinating watching them practice their skills.

Contrary to what the majority of people believe (due to fear mongering), the sharks are not really interested in humans.  They came close to investigate, but they really were not the fearsome man-eaters eager to eat anything and everyone in their vicinity.  The only behavior that could have been termedas “aggressive” was really only investigation.  The boat crew informed us that the cages give off an electrical signal into the water, and sharks have a sensor in their noses that detect electrical signals for navigation.  So the one juvenile shark that rammed into us was only trying to figure out what was putting off such a strong impulse.  Granted, even an investigation bite can be deadly, but they certainly do not deserve the reputation that they have been given.

I was quite thrilled to have gained this experience, and I definitely look forward to returning.

To learn more about these amazing creatures and to see some impressive cage-free diving with them, here is an excellent documentary: