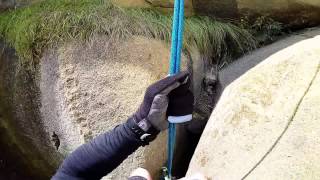 On August 22, 2015, I gave my first shot at Canyoneering by joining some friends to The Seven Teacups just north of Kernville, CA.  It was an absolutely terrifying experience, but I also loved every second!  Canyoneering is a sport where you can explore a canyon by rappelling, rafting, and waterfall jumping.

My friends Brian, Dan, Jim, and Eric are all experienced canyoneers and rock climbers, and they have a passion for the sport.  I have a fear of heights….  But the thought of going with more experienced guys like them made me willing to brave it.

Seven Teacups is actually a series of seven circular pools of water formed by a total of six waterfalls.  The smooth granite rock of the Sierra Nevadas was sculpted to form perfect little swimming holes by the series of cascades, and it makes for an adventurers’ epic playground!  To go from top to bottom of all cascades down to the Kern River, you will ultimately descend over 300 feet in just about a quarter of a mile.  It is considered “technical” canyoneering because the water pools have large rocks in them and you must land in the water at just the right spot to avoid smashing into something that might break a limb or worse.  It is also considered Class C due to the water involved.

We had to start off by wading our way through chest deep water and scramble over rocks in an area called the Dry Meadow Creek, which is a tributary that feeds into the Kern River.  Before we had to start the rappelling, there was one point where we had to push through some brush while wading through the river.  Immediately upon pushing past the brush and climbing out of the water onto the rock in front of us, we suddenly were on top of the canyon looking over to the immensely large Sierra Mountains on the other side of the Kern River.  We could not see all the way down to the Kern River from this vantage point, but the impression given was that it is quite a ways down.  Our goal was to rappel down the canyon next to and through waterfalls to ultimately finish in the Kern River and then hike our way along the River back to the cars.  Canyoneering is an activity that does not allow one to turn around and go back after you start, as the only way back up is to hope someone calls a rescue helicopter.  That means, once you start, the only way to get out is to keep pressing on forward.

Despite my fears and anxiety, I had an amazing experience!  We ultimately completed six rappels, most of the right next to a waterfall but with one of them requiring us to descend through the middle of a 35’ waterfall.  We also had to make three cliff jumps at parts where there was no anchor to rappel from.  One of these jumps had the option to do a waterslide along slick moss grown into a perfect butt groove in the rock….so of course I took the option of doing the water slide on this one to then be propelled into mid-air for a 12-15’ drop into the pool below.

The largest descent was roughly 80’, which was quite terrifying for me.  But I didn’t look down and just kept watching my feet on the rock wall so I could remind myself that I was “safe”.  And then there was the overhang….  The last rappel was a two-part rappel that required us to walk down the wall for about 20’ feet before dropping into an overhang with no wall to then descend down the rope with only our hands on the rope guiding our descent to land in chest-deep water below us right next to a massive waterfall.  Then we had to swim our way to the other side of the pool to then rappel the same rope down 40’ next to a dried up fall.  From that point it was only a matter of swimming/wading with giant rocks on both sides of us until we got to the Kern River.

One of the reasons I was eager to do this trip was so I could learn how to rappel because I hear Zion is a mecca for canyoneering.  Sometime in the near future, I plan to go to Zion for that activity, so I am very glad I did this trip to the Teacups to teach myself the basics and to also learn that fear is only a feeling that can be overcome with just a bit of gusto and courage.