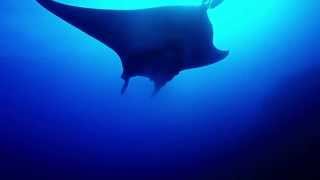 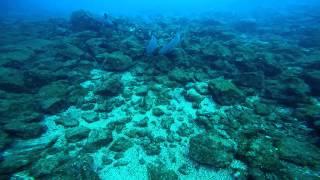 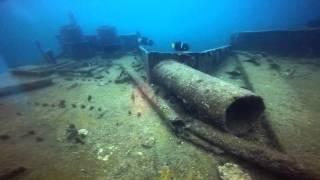 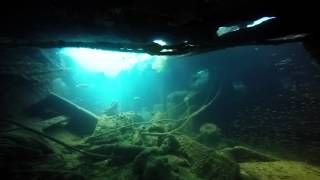 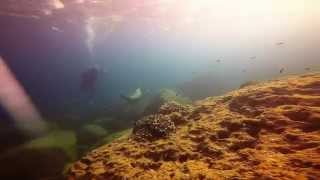 Porcupine Fish at Salviaterra wreck in Sea of Cortez 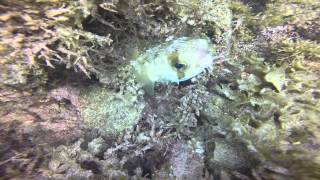 Jeweled Moray at Salviaterra wreck in Sea of Cortez 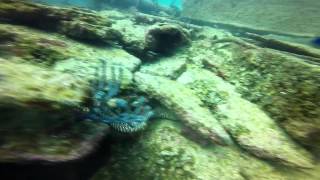 Round stingray at Swanee Rock Reef in Sea of Cortez 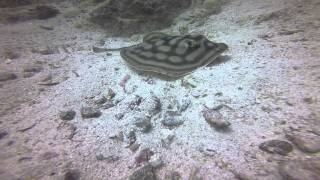 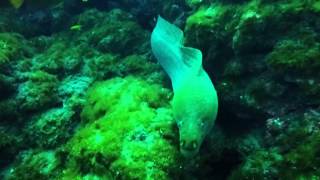 The Socorro Islands (also known as Islas Revillagigedos) is a small set of islands formed by volcanos that are still somewhat active.  This set of islands is considered an archipalego and are often referred to as the Mexican Galapagos. This archipelago consists of four islands: Socorro, San Benedicto, Clarion, and Roca Partida.  These islands have been created by volcanic activity, with one of the islands (San Benedicto) most recently erupting in the early 1950s.  These islands are often compared to the Galapagos Islands in Ecuador or Cocos Island in Costa Rica because of the big animal encounters and the large variety of marine life.  The minerals and warm temperatures brought on by the volcanic activity makes for a mecca of big animal encounters for divers.  I had encounters with large marine life that only a very small percentage of other people throughout the world can share!

I was able to swim with a couple dozen Giant Pacific Manta Rays as large as 20 feet from wingtip to wingtip, white tip sharks between 2-6 feet, a few dolphins, some gigantic moray eels, big wahoo fish, and a bunch of colorful tropical fish.

The experience of having a Giant Pacific Manta Ray about 17 feet in wingspan look you in your eyes from 20 feet below, change its course to swim directly towards you, and then it suddenly pulls up like a fighter jet making a steep climb in elevation only to graze by inches from your face….it was an exhilarating experience that left me humbled and in complete awe for the majesty of these creatures.

The Manta Rays are so friendly and gentle that they truly do enjoy interacting with divers.  However, they have a mucus on their bodies that protects them from infection, and the oils from our skin destroys the mucus so we have to be very careful not to touch them.

Another awesome giant sea creature that I was able to encounter here was the Whale Shark!!!  While we had 3-5 Manta Rays dancing around our group of divers, we saw a Whale Shark about 45 feet in length swimming by about 70 yards away.  It’s hard to believe that an entire group of divers would ignore Giant Pacific Manta Rays, but that’s exactly what happened with the Whale Shark came sauntering by!!!!  These sharks are also very gentle and enjoy interacting with divers, but again, one must respect their massiveness and omnipresence.  Although they are members of the shark family, they are filter feeders that feed on krill so they pose no threat to humans.

One of the nights I did a night swim with Silky Sharks. They are about 5-6 feet and have a dead soulless look in their eyes. The crew chummed the water and turned on the boat’s undercarriage lights to attract fish. The sharks were too scared to come up to the lights where they crew wanted us to swim, so myself and another brave soul—Paddy Ryan—went swimming into the dark. Paddy had a giant light attached to his camera (he is a professional underwater photographer), so we got to see some awesome sharks up real close. It scared the hell out of me but was a great experience.

The dolphins here were also VERY friendly.  They call the dolphins evil because they don’t realize the limitations of humans and they coax divers too deep and also far off into the ocean where it’s dangerous. I was filming a pod of 4-5 dolphins and suddenly the dive computer started screaming at me, and when I looked at it I realized I was 132 feet deep!!!! The deepest I had been before was 112′. I was surprised that the deep didn’t effect me physically, but any deeper could have been dangerous. They try and restrict recreational diving to 120′, so 132′ was definitely not within the acceptable zone for fun diving.

As if the trip couldn’t have been even more exciting, it turned out that we had a hurricane coming right at us. When we first arrived to Socorro, Hurricane Blanca was about 3 days behind us. So we stayed at Socorro for two days and then hightailed our boat to the Sea of Cortez to a bay near La Paz.

We successfully fled Hurricane Blanca to the bay near La Paz where we got to dive a couple of very cool wrecks–La Salvieterra, Fag Ming, and another unnamed wreck.  Although I got to see some very impressive small reef life, the undeniably most exciting dive spot here was Los Islotes….the sea lion colony!!!   We got to swim with many sea lions. The juveniles loved to do acrobatics by twisting and turning over and over and over seemingly non-stop.  They also liked to chew on our accessories just like puppy dogs do, with our group being subjected to torture by one pup going from one person’s fin to the next chewing away.  One of the juveniles also took a bit on my GoPro to investigate it.  We also were fortunate enough to find ourselves in the middle of multiple bait balls of Jack Fish that would suddenly part in unison in two directions as the lions leisurely swam after them.

I highly, highly recommend the Belle Amie to anyone wanting a dive trip of a lifetime!  The crew was super friendly and helpful, the food was delicious, safety was a top priority and happiness was a close second!  I truly was spoiled for my first ever liveaboard!!!