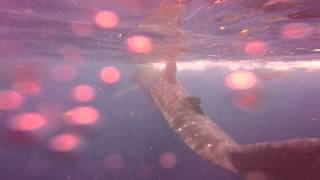 The whale shark is one of nature’s most impressive and humbling creatures. They can reach lengths in excess of 41′ and weight in excess of 47,000 lbs, yet they curiously feed on one of the ocean’s most smallest creatures–the plankton. Although they are part of the shark family, they have no teeth and only eat plankton via filter-feeding whereby they drink massive quantities of water and push the water out their gills to swallow their tiny prey.

Knowing that this was an experience I simply could not continue living without, I booked a couple of dive trips and a freediving with whale sharks package with Squaloadventures located on the small, laid back island of Islas Mujeres just 8 miles off the coast of Cancun. The end of July is an awful time to go to the Mexican Rivieria if you are not comfortable with triple digit heat with 100% humidity, but the whale sharks come into this area in aplenty this time of year because for whatever reason the plankton are at the surface here instead of in the deep below.

Squaloadventures took us on a boat to the feeding area, where we jumped in in sets of two to snorkel and swim along side these massive creatures.  The feeling of have a 30′, several thousand pound sea creature swim towards you with its mouth bigger than your body gaping open to suck in all the water around it….you immediately feel like you should change your name to Jonus if you survive the experience.  The immensity truly puts our place into this world in perspective.

Despite how big they are, they are completely gentle creatures that would only harm you if you accidentally get in the path of its wrecking ball of a tail.  I happened to make that accident come true….in one of my videos you can see me almost lose grip of my camera, and the reason is because I got smacked in my shoulder by a tail the same size as me as I was struggling to simply keep stride with the beast.

The creatures are so powerful that one small flip of their tailfins cause them to move great distances, but due to their size it almost seems as if they move in slow motion.  I loved every second of this experience, and Squaloadventures did a fabulous job at making this dream a reality as they are a very professional and responsible dive shop.

Over the course of this week, I was also able to dive the underwater statue museum called MUSA where they sunk several concrete statues and structures to create an artificial reef, and also dove a wreck and a reef at night.  The night dive at the reef rewarded me with a very exciting experience, as I got to watch a lobster crawl up the sloping reef to escape our flashlights when a medium-sized octopus sprung out of its hidden crevice to attack it.  Our flashlights scared the octopus so it let go of the lobster and then splayed its tentacles out so that the webbing in between would make it appear to be much much larger than it actually was.  It then burst a cloud of ink in our direction and took off.

I also walked about 4.5 miles to the southern-most tip of the island to observe statues erected in ancient Mayan times to their Goddess Ixchel.  During the walk, I saw several thorned grey iguana that were as large as small dogs gazing out over the cliff edges to the ocean, and also got visually lost in the brightest blue water I’ve ever seen crash onto the rocky beaches about a hundred feet below me.  Unfortunately I am not able to share any pictures of these sights, as after the hike I was suffering from heatstroke and I left my DSLR in the cab that I took back into town.