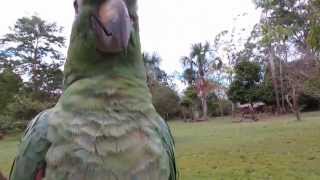 The jungle is a very special place.  Flooded with an abundance of life and nature; the senses are all piqued by the sounds, smells, and bright natural colors.  It truly is a majestic place that should be cherished and preserved with the goal of sustaining life and biodiversity.

In the Peruvian Amazon, my father and I first flew into a town along the mighty Rio Amazonia (Amazon  River) called Iquitos.  Iquitos is the largest city in the world that is not accessible by vehicle, other than a quick 20-30 minute drive to a smaller village called Nauta where most boat trips deep into the jungle begin and where most fishermen frequent.  One can only arrive to Iquitos by boat along the Amazon or by plane.  Being along the Amazon River allows the city to be a vibrant and thriving city, and is the only starting point for visitors to the norther Peruvian Amazon (Puerto Maldonado is the jump off for the southern Peruvian Amazon).  The architecture of the city is heavily influenced by Spanish architecture, as the city is said to have been at its economic peak in the late 1800s to early 1900s when entrepreneurs sought to harvest rubber from the sap of trees.

The fact that its economy is driven by tourists and local agriculture and is located within a third world country is readily apparent by the dilapidated buildings; garbage littered loosely around trashcans stuffed full; roads full of pot holes; and clunker vehicles zipping by.  Old shanty-towns have been formed along the river banks where poor families hoist together scrap metal and other debris-items to create shelters.  We wandered down into one of the shanty towns and got caught in a heavy rain-storm.  Because the shanty-town was downhill from the rest of the city, all of the rain run-off flooded the streets of the shanty-town and we had to run from overhang to overhang and run through essentially flowing rivers while crossing the streets.   The dwellers of the shanty-town gave us odd looks; likely because they weren’t used to seeing curious white tourists actually wander into their little make-shift town center.  Regardless of the slum-like living conditions, the spirit and energy of the city undoubtedly proved it is a jungle town.  Most especially at night next to the river walkway where street artists would perform their songs with wooden homemade instruments, dances, and sell their handicrafts.

The outdoor market is definitely not something to miss; where you can purchase any manner of items, ranging from spices to herbs for tea and remedies, to wood carvings, to fresh pig meat, to all varieties of fresh fish and produce.  I remember wandering through the back alley behind the main portion of the market where animal parts such as fish heads and pig intestines were being sold, and other animal scraps were discarded on the ground drawing the attention of nasty vicious vultures.

From Iquitos, we met our guide Hulber Paredes.  A local guide born in Ecuador with a true passion and love for the wild jungle; Hulber is an excellent guide who was more than ecstatic to show us a trip of a lifetime.  After a drive past long stretches of empty fields and forested lands, we arrived to Nauta where we visited a local open air market.  Pops tried the fried brain of a caiman (small cousin to a crocodile) and we both sampled the meat of walking catfish (ugly dark grey/black fish with an outer body that was hard like exoskeleton).  Not even spooning yellow tomato salsa onto the catfish made it tolerable….I can’t imagine how bad the caiman brain was…  But the fruit was fresh and bursting with flavor.

We finally made our way to our jungle lodge where one can only arrive by boat along the edge of the Pacaya-Samiria Preserve.  The lodge rested along the Maranon River, which is one of the two rivers that converges (the other being Ucalayi River) to form the mouth of the mighty Amazon.  The Amazon River is one of the mightiest and most majestic rivers in the world, and ranges from roughly 6 miles to over 30 miles in width depending on where and the season.  We were fortunate enough to take a small outboard motor skiff to the mouth of the river where the Maranon and Ucayali met.

From our jungle lodge, we were able to hike into the jungle to search for critters.  We discovered many different species of frogs and toads; salamanders; a pink-toed tarantula that was the size of my palm and literally had eight pink feet; whiptail scorpions (that look like they belong in a sci-fi movie as opposed to on Earth); many sloths; various birds; and during a night hike we saw a small opossum with eyes like small flashlights that shined in the dark.  One night two barn owls hung out on the rafters of our lodge front porch and would swoop down to eat the moths that were clinging to the screen window next to my bed.  It was pretty impressive watching them swoop from rafter to rafter and dive bomb the moths on the screen.

We also embarked upon a fishing trip to fish for red bellied piranha!  We used pieces of fat and skin from chickens to bait our hooks, dropped the lines into the shallow banks next to tree roots, and hooked as many piranha as we could.  The grilled piranha meat was quite delicious, as the fruit that the piranha eat that falls off the trees into the rivers caused their meat to be sweet and moist.  Especially delicious were the tomatoes and shaved heart of palm drizzled with olive oil along with the grilled piranha meat.

Hulber took pop and myself along with the boat driver (El Capitan) and one cook for a special side trip where we camped deep into the Pacaya-Samiria Preserve in the Amazon jungle for 3 days and 2 nights.  We were way beyond anything that could even be remotely called civilization.  We were able to visit a couple of local villages along the way into the heart of the jungle, where we got to see how the people lived simple, quiet lives where they informed us they were happy and believed they were rich because they had everything they needed to live off the land.

During one of our jungle hikes deep in the Preserve, we were on a mission to find howler monkeys.  After a long morning of failed attempts at hiking in areas where we believed they frequented, we finally spotted a family high in the trees as we were boating our skiff along the river.  We quickly ran our skiff to shore and ran through the jungle off the paths with Hulber and El Capitan hacking away at fallen branches and vines with their machetes to give us a path.

I ran right into a quicksand/mud pit where I immediately sunk to my right knee.  I had to reach up to a low lying branch to pull myself up!  But it was well worth it because I got several excellent photographs of the red howlers climbing through the trees as they bellowed out their low guttural growl to warn others that there may be predators lurking.

We were also fortunate enough to go on a night search for caiman.  Living up to his promise to show us the trip of a lifetime, Hulber even jumped into the pitch black water that looked like oil in the middle of the night under only the moonlight and he came up with a 4’ long black caiman in his hands!  He brought it on board and allowed pops and me to take turns holding it.

During our boat trips through the Amazon tributaries, we were able to see many pink river dolphin (the only dolphin that swims in both salt-free rivers and also the salt-filled oceans), water lizards, giant river otters (larger than most domestic dogs), black caiman, boa constrictors, capybara (the world’s largest rodent), and the unbelievably giant paiche fish that can grow up to 9 feet in length and jumps out of the water to eat bugs only to then smash back into the water with a startlingly loud crashing sound.

After the 6 day visit to the jungle lodge that also included the 3 day camping trip, we finally went back to Iquitos for another 3 days before having to leave.  During these last couple of days we were able to visit a manatee rescue center where they rescue baby/juvenile manatees from the river after having been abandoned due to their mothers being poached by hunters for their fat or due to their mothers being killed by speeding boats that don’t pay attention for the large grey masses that only partially stick out of the water.  The baby manatees were gentle creatures that happily ate water lettuce out of our hands and softly sucked on our fingers attempting to feed from their missing mothers’ teats.  We were also able to visit two different rescue farms where animals were rescued from poachers.  At these two places we were able to play with howler monkeys, wooly monkeys, and I even held a sloth, red tailed boas longer than 12’ in length, and also got to pet a small ant-eater called a coati that nuzzled at my feet like it was a friendly house cat.  We also got to be the audience to a green macaw that sang opera.  The treatment these animals received from their poachers means they would never be able to survive in the wild, so the hands-on play at the farms is the best that their lives could be at this point, so it was nice being able to see how playful and friendly the creatures were.

A little piece of me has always felt like it belongs back in the Amazon, and I think the increasingly-growing restlessness in my soul will likely never dissipate until it is satiated with another long trip to the jungle where I can continue exploring, learning, and hopefully giving back to help conservation efforts.  Years ago an oil refinery along the Amazon river had a massive spill that destroyed a portion of the river and killed many of the wildlife that depends upon a clean unpolluted river.  I would love to see a new, strong movement to raise more awareness to the need for our current and future generations to ensure environmental protections are being honored and strengthened.