Cliff jumping into the crystal blue waters of Havasupai!!!!! Havasupai Falls--a jewel in the desert 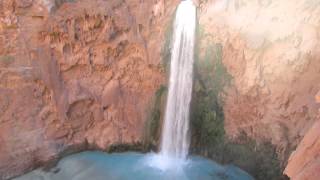 Anyone who loves backpacking, waterfalls, hiking, wading through rivers, and cliff jumping must make a trip to Havasupai.  But please…..DON’T HIRE THE MULES OR HORSES TO CARRY YOUR PACKS!!!!!  For one thing, you definitely have a sense of accomplishment when you actually earn your trip by carrying your own pack, but I also saw several of the pack animals with wounds on their hindquarters from the rawhide straps and the wounds were untreated and oozing puss…definitely a sad thing to see.  So please, earn your experience by carrying your own gear.

I have been to Havasupai twice as of the time of this writing, and I most certainly plan to go back.  My first real point to point backpacking trip was here in 2008, and we took the helicopter back out which gave us some pretty impressive views of the Grand Canyon and Mojave Desert.  The second time was in 2014, and I had much more courage under my belt to help me cliff jump and swim through the rivers.   Both times were amazing and exciting trips.

Havasupai is a Native American tribe with their reservation deep into a canyon just next to the Grand Canyon.  Their people have inhabited this portion of the canyon for about 800 years.   On one of my trips we hiked from the campgrounds all the way to the muddy Colorado River in the Grand Canyon, which was a roughly 24 mile round trip hike through some incredibly gorgeous natural scenery.

The Havasu Creek that eventually feeds into the Colorado River forms several waterfalls and swimming pools as it flows over limestone that makes the water crystal clear and bright blue.  After making the 11 mile hike from the trailhead through a long deep canyon that towers on both sides with red and brown rock, you first reach the Havasupai lands and see a sample of the bright blue Creek and bright green foliage.  The blue and green almost appear as if they are boosted in neon due to the immensely strong sunlight in the middle of the day and after having been inundated with red and brown rock during the 11 mile hike.  But once you hear the massive crashing of the waterfalls before you even see them, you know you are in for a real treat.

You follow along the Creek towards the sound of the waterfalls, and then you reach a small Havasupai tribe village where you have to check in and get your bearings.  There is a general store and a typical deep fried cafe to replenish your gear and lost calories.  After checking in and admiring the simple way of life of the locals, on the other side of the village you get to see some smaller cascades down the cliffs beside you and you get to fantasize about how great the bright blue water would feel to wash off the dirt and sweat from the trek in.  And then you suddenly realize the reward for your efforts….Havasu Falls.

You turn a corner to the left and are suddenly on the cliff edge looking down to Havasu Falls to your right cascading roughly 100 feet to the pool below with such force that it sounds like a freight train rushing right towards you.  After taking several selfies, group photos, and natural photos, you have to literally pull yourself away from this breathtaking view in order to descend the cliff down to the campsite.

The campsites are set up all along the Creek that flows out of Havasu Falls pool, which makes for a spectacular natural setting for camping.  You get to listen to the falls all night and if you camp further away from the falls you get lulled to sleep by the soft babbling of the Creek as it winds its way through the campsite to an even more immense waterfall…Mooney Falls.

After hiking about a mile past the campsite along the creek, you are once again rewarded with a view down the cliff to your right.  Mooney Falls drops about 200 feet and the cascade is in the middle of an enclave of canyon walls that seems almost too perfect to have been naturally created.  In order to get to the bottom of the falls to swim in its pool, you have to scale down a cliff face by slowly buttscrambling and hanging onto a metal chain staked into the cliff.  It is quite treacherous, especially given that the chain inevitably gets wet from the mist off Mooney Falls, but if you come to this place you know you will regret not making the climb down.

At the bottom of Mooney Falls, you have the option of wading through the Creek or hiking along side of it for roughly 6-7 miles until you get to Beaver Falls.  Aptly named because it looks like beavers could have built it, with a series of cascades that are actually rock but act as if they are beaver dams by stopping the forward rushing of water and forcing it to slowly works its way over the multiple small cascades.  This manner of falls also creates several swimming pools and places for cliff jumping (so long as the Tribal ranger is not watching you like a hawk from the trail high up on the cliffs).  In order to get down to Beaver Falls, you have to again scale down the cliff face from the trail approximately 100 feet.  But again, I cannot stress it enough….if you come here, you have to brave the climbing to get the full experience.

After Beaver Falls, you then get to hike and/or wade along the Creek until you suddenly run into the mighty, muddy Colorado River.  The contrast of seeing the bright azul Havasu Creek suddenly run smack into the muddy Colorado is a very impressive thing to see and I highly recommend the trek, even though it makes for a very full day especially given all of the many stops for swimming breaks.

When we made the trek to the Colorado, we were treated by a family of Big Horn desert sheep following us.  We first spotted them on the rocks above us, watching us and slowly moving along in the same direction as us….as if they were just as curious about our behavior as we were of their’s.  Once they saw we posed no threat, they came down onto the trail and got within 20 feet of us.  I spoke to a Tribal range rand he said this family is very common in that area, and they have grown accustomed to people because there is no hunting allowed, which means they have not associated humans as being a threat.  I found this to be quite astounding because I have seen Big Horn sheep many times in the Anza Borrego desert just outside of Palm Desert, CA and in Joshua Tree, and those sheep have always been very skittish and afraid.  So it was nice having these gentle creatures walk right up to us in their natural habitat.

I will end by describing only one sad experience about Havasu Falls…..I lost a GoPro during one of my trips.  We were braving the cliffs and jumping off as many as we could.  I initially did not want to jump off the 35 foot cliff, as I am afraid of heights.  But I told myself that it would make for some awesome GoPro footage…so I did it….and I lost that very GoPro.  The force of my 215 pound frame slamming into the water after a 35 foot drop ripped the camera strap off my wrist and it immediately sunk to the bottom where I could not even freedive down to retrieve it.  I had such awesome footage of cliff jumping, swimming through waterfalls, and finding caves behind waterfalls….I literally almost cried, and I had to go to the cafe to drown my sorrows in deep fried comfort food.  I would love to be able to share that footage, so I will have to just return and recreate it.