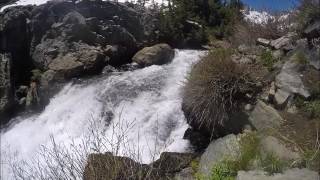 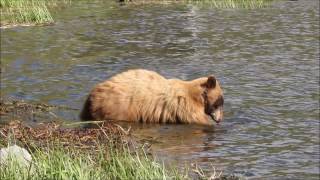 From June 17-20, 2016 I got to spend the weekend backpacking the Ansel Adams wilderness with a great group of inspiring wilderness adventure-seekers from the meetup group San Diego Backpackers.

We started off by camping at Twin Lakes just outside of Mammoth, Cal., where we got to see a juvenile bear searching for food on its own and ambling through the campground passing within 20 feet of us.  We had nothing to fear, because the bear was clearly on its own and it was more afraid of us than we were of it.

On Saturday, we took the shuttle from Mammoth Lodge to Agnew Meadows to begin our 3 day trekking adventure.  On that first day, I covered a lot of elevation gain and mileage, roughly 9 miles with approximately 2,100 feet in elevation gain (“I” covered 9 miles because I took an accidental detour when I lost the group).  We were definitely rewarded for our hard work with a spectacular campsite next to Thousand Island Lake in a marshy area with little creeks and streams feeding into the Lake, which had several little earthy islands and was towered by the impressive 12,950′ Banner Peak.  This is the area where the PCT continues north and the JMT splits to the south.  The Lake sits at about 9,865′ above sea level.

On Sunday, we hit the trail towards Garnet Lake.  This past winter was an El Nino year, which brought a lot of precipitation…meaning there was a lot of snow left on the trails and the mountain peaks.  We had to navigate the snowy terrain as we quickly gained elevation up a pass that reached approximately 10,1500 feet above sea level.  This route also allowed us to pass by the very serene Ruby Lake and Emerald Lake.  After about 2 hours of hiking we finally began descending the pass to Garnet Lake, where we stopped to take the obligatory photos on an observation point just off the trail.

After circumnavigating part of Garnet Lake across a bridge and ambling along a beautiful trail on the banks of the Lake covered by a tunnel of trees with the 13,150′ Mt Ritter staring down at us, we then quickly ascended another pass that was completely covered in snow.  It was a bit tricky for me as a rookie figuring out where the trail was supposed to be, and I’m pretty sure I failed to follow the switchbacks that were buried by snow.  But after reaching the pass, we then quickly dropped significant elevation down into the forest again.

We then eventually made it down to Ediza Lake, which required us to take a trail off the main JMT along a beautiful creek heavily covered in wilderness with multiple cascades.  It is said that Ediza Lake was John Muir’s most favorite part of this wilderness area, and it is easy to see why.  The Lake is surrounded on three sides by mountain peaks and hills, with the only entrance/exit point being where the creek flows out of the lake, so you are essentially in a bowl that allows for sunset and sunrise to create dancing shadows and amazing light displays. Overall, on Sunday we covered another roughly 8.5 miles with roughly 1,417′ in elevation gain but also roughly 2,014′ in elevation loss.

Finally, on Monday, we then headed back to the JMT to pass by Shadow Lake.  I wasn’t able to get much pictures from Shadow Lake because the mosquitoes ran thick in this area.  Shortly after passing by Shadow Lake, we connected back onto the PCT by descending next to the amazing Shadow Lake Falls, which consists of a series of roughly 20 foot cascades that ultimately creates a total of roughly 500 feet of falls.  Once at the bottom of the canyon, you then have to ascend again for another 1.5 miles or so to return to Agnew Meadows for the shuttle back to the Lodge.  Overall, on Monday, we covered another roughly 8.2 miles, but with the majority being flat or descending in elevation.

Overall, it was a fairly strenuous trip due to the per day mileage to make it a 3 day trek, but there was not one second on the trip that I found myself regretting it.  Every view was worth the pain, and it is very easy to see why John Muir fell in love with this area.