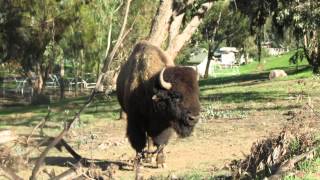 Roughly 22 miles off the coast of Los Angeles is the island of Santa Catalina, which is actually one of 8 islands in the group Channel Islands.  The Channel Islands are designated as a national park, and Santa Catalina is the only one inhabited by residents.  Most people know of Catalina for the little village Avalon, with its quaint and relaxing, slow-paced atmosphere, Wrigley botanical garden, harbor full of boats, and the iconic “Casino” that is not a gambling casino but is instead a grand ballroom that sometimes shows movies as well.

However, most people don’t realize that there is an entire backcountry to this gorgeous island.  One can reach the backcountry by jeep from Avalon, backpacking from Avalon, or boat to the smaller village Two Harbors.  Two Harbors has some semi-permanent residents, but they are mostly people who work in the Village running the dive shop, campground HQ, cafe, or bungalow rentals.  My friends Mark and Dan and I took the boat from San Pedro to Two Harbors and began the 7 mile trek along the dirt service road north to our campsite on the beach at Parson’s Landing.

Along the hike we encountered several bison!  The bison were brought to Catalina in the 1920s for a silent western film The Vanishing American.  One bison was laying down right next to the road, and as nervous as we were to walk by it for fear of startling it and getting gorged, we had to keep moving forward to get to our campsite by sundown.  As we approached, it suddenly stood up and began huffing at us…we then immediately respected its immense size and show of strength.  Thankfully, it let us quietly but quickly pass.  Over the course of the weekend we saw several more bison and began to understand that they truly roam free on this island as if it is their wild kingdom.

We also quickly learned the beauty of this island, as recent rains left the hills bright green with grass instead of the usual dry, yellow grass that we see everywhere in So Cal.  Many stretches along the service road looked down sea cliffs to the reefs and rocky coast below, where we saw the dazzling blue-green waters that reminded us of Hawaii.

Upon reaching our campsite at Parson’s Landing, we finally learned that we were to set up our tents right on the beach.  We found an alcove that would provide us shelter from the night ocean winds, but would also shelter us from the noisy boy scouts camping on the other side of the sea cliff wall that separated us from the other campers.  We hiked to the top of a hill just at dusk so we could look down to our beach as the sunset and this vantage also provided us with awe-inspiring views of the L.A. Coast that lit up like fireflies all coming alight in succession.

The island is 22 miles long and 8 miles across at its greatest width, and the highest point on the island is 2,097 feet.  On Saturday, we of course took the hardest route to the top.  We wanted to hike along the Trans-Catalina Trail, but couldn’t find it easily from Parson’s Landing.  So we saw a dirt road that went up the hill, which we figured would take us up to the Trail.  But we didn’t realize that after about .10 of a mile the road suddenly went straight to the sky what felt like a 60 degree angle for a third of a mile.  After all was said and done, we climbed approximately 1,800 feet in just under a half mile…but the views from the top were well worth the fight as we got to admire both the north and south sides of the island sloping down on either side with the great blue ocean expanding out forever, clouds beneath us forming halos around other peaks of the island, and views of Mt. Baldy covered in snow off in the distance East.

After finally hiking our way along the apex of the island and down to Two Harbors, we rented kayaks to tour around the harbor.  We eventually kayaked over 5 miles to investigate the reefs surrounding Bird Rock and Ship Rock where we saw a few dozen Sea Lions and Harbor seals sunbathing on the rocks, dive bombing to evade us upon our invasion into their territory, and many bright orange garibaldi defending their territories in the reefs from other fish.  As we sat stationary in our kayaks, we were fortunate to witness a couple dozen sea lions all dive from the top surface deep into the ocean and then curve their descent to drift off in the opposite direction from us, almost as if it were a synchronized swimming performance.

After kayaking and hiking back, we were then blessed with some of the brightest stars that can be observed from anywhere in So Cal.   All in all that weekend, we hiked approximately 24 miles around the northern part of the island and kayaked over 5 miles, and we just barely scratched the surface of all the outdoor adventure opportunities this gem can provide.

I highly recommend any outdoor enthusiast to have the backcountry backpacking experience here.