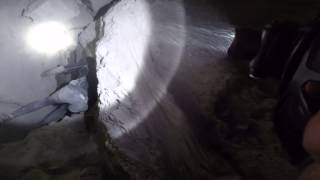 Anza Borrego Desert State Park has a lot to offer in its massive desert playground, and one of the most interesting (but often unknown) features is the mud caves.

The mud caves are located in the Carrizo Badlands part of the Anza Borrego Desert State Park, in eastern San Diego County.  Said to be one of the largest and most extensive mud cave systems in the world, there are 22 caves and 9 slot canyons.  Some of the caves are up to 1,000’ in length and up to 80’ high.  They were created by rushing water flowing through thick silt deposits after heavy rainfall and flash flooding, creating channels through the mud where the water rushed through and when the mud dries it creates a cave.

Some of the caves are rather easy to navigate, whereas others require you to put on your bravest face and test your fear of dark, small places.  Many areas will have you belly-crawling under low ceiling hangs, crawling up and over boulders, squeezing through narrow cracks that require sucking in the belly, chimney crawling up narrow walls, balancing on edges with a drop down into the darkness, and in some areas rope climbing up steep walls.  The majority of the time the caves are pitch black dark with no light other than what you brought in with you (headlamps are a MUST), while some places have holes in the ceiling that act as skylights.

These caves can be VERY dangerous and should not be taken lightly.  People have died by getting lost or trapped while exploring on their own.  You should never go in alone, and only if you are with someone experienced in exploring these caves.  You should always have a headlamp and water.  You should also avoid going in when it is currently raining, having recently rained, or is about to rain, as the cave ceilings and walls do shift when the mud gets wet, and the caves may collapse if there is flash flooding.  4WD is recommended, as the drive back to the caves is a dirt and rocky road that can get quite muddy during the rainy season.  Finally, it is also advisable to NOT walk on top of the caves, as the ceilings can be weak in spots and you could drop through with an unknown drop up to 80’ to the cave floor below.